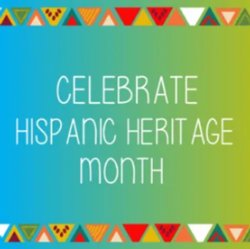 What
National Hispanic Heritage Month 9/15/22-10/15/22)
When
9/30/2022
Where
The Library of Congress, National Archives and Records Administration, National Endowment for the Humanities, National Gallery of Art, National Park Service, Smithsonian Institution and United States Holocaust Memorial Museum join in paying tribute to the generations of Hispanic Americans who have positively influenced and enriched our nation and society.

Every year from September 15 to October 15, Americans celebrate National Hispanic Heritage Month by appreciating the community’s history, heritage, and contributions of the ancestors of American citizens who came from Mexico, Spain, the Caribbean, and South- and Central America.

Hispanic Heritage Month originally started with one week of commemoration when it was first introduced by Congressman George E. Brown in June 1968. With the civil rights movement, the need to recognize the contributions of the Latin community gained traction in the 1960s. Awareness of the multicultural groups living in the United States was also gradually growing.

Two heavily Latinx and Hispanic populated areas, the San Gabriel Valley and East Los Angeles, were represented by Brown. His aim was to recognize the integral roles of these communities in American history. Observation of Hispanic Heritage Week started in 1968 under President Lyndon B. Johnson and was later extended to a 30-day celebration by President Ronald Reagan, starting on September 15 and ending on October 15. It was enacted into law via approval of Public Law 100-402 on August 17, 1988.

September 15 is set as the starting date for the month as it is important for many reasons. It is the independence anniversary for Latin American countries El Salvador, Guatemala, Costa Rica, Nicaragua, and Honduras. From here onwards, the independence days of Mexico and Chile fall on September 16 and September 18, respectively. Dia de la Raza or Columbus Day also falls within this month, on October 12.

Hispanic Americans have been integral to the prosperity of the U.S. Their contributions to the nation are immeasurable, and they embody the best of American values. The Hispanic-American community has left an indelible mark on the U.S. culture and economy.